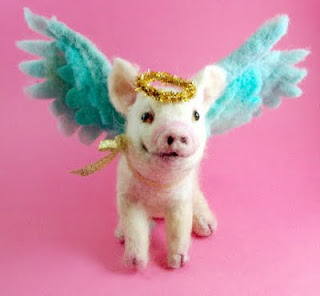 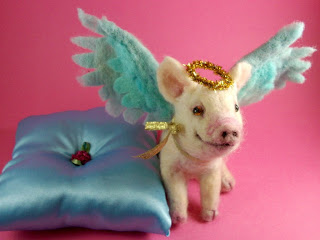 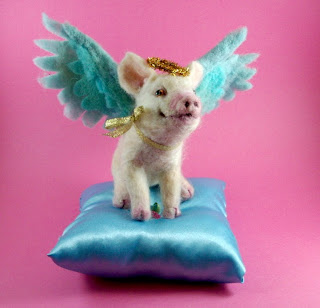 Here's my latest little one. I named him Gabriel. His wings were needle felted then hand-dyed. Gabriel's 7 day auction started on eBay last night at 6:45PM PDT.

When I was making him, it reminded me of a church Christmas pageant that I was once in. It was a tradition at St. John's Lutheran church in Anchor, Illinois to have the pageant on Christmas eve. It was also a tradition with my family to open presents after church. The church pageant was always a very exciting event for the Andreae kids. But this year was even more exciting. I was going to be an angel and my sister was to play Mary.

That night we ate our bowls of chili and quickly dressed to go to church. So after the 30 minute ride through the slushy snain (rain & snow) we arrived at our beautiful little brick church. My sister and I headed down stairs to get dressed. Valerie was beautiful in her Mary costume. Being the smallest angel my costume seemed to overtake me. I had to tie the belt extra high to keep my gown from dragging. Plus I had to walk very gingerly or else my halo would fall off. When we were ready, we lined up to go up the stairs and into our assigned pew. It was the larger angels first and me in the rear. That was the way we were also to file onto the stage and the opposite upon leaving.

I sat in the pew watching my sister as she knelt before the manger. Joseph was kneeling behind her. The light from manger cast a warm beautiful glow upon them. It was now the angels turn to stand behind the holy family. As we filed up on the stage, I noticed Joseph was looking kind of green. Then as we were standing behind, Joseph bent over and threw up in the manger. You can well imagine the smell as it hit the source of the beautiful light, a 150 watt trouble lamp. My poor sister had to kneel there for the rest of the evening. Luckily for us angels we got to go back to our pew. But I led them astray into the wrong pew. The pastor's wife had to redirect us. As I sat down, the chili took hold. I let out the loudest fart ever. It seemed to echo through out the whole church. It was hard not to laugh. As I sat there trying to hold back the giggles, my halo fell off. I bent down to pick it up. And guess what? Another frog had escaped and the whole row of angels were all cracking up as we sang "Angels we have heard on high". Proving once again my Mom's favotite saying. "You can dress them up. But you can't take them to town,"

Posted by Robin Andreae at 9:08 AM 0 comments 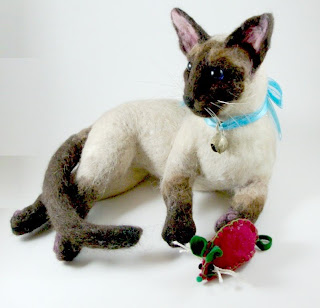 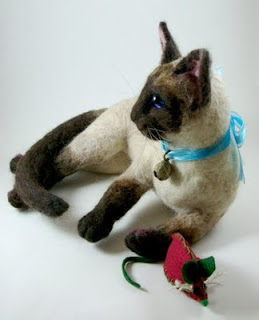 I just finished this kitty a couple of days ago and have him listed on eBay now. He's kind of a big fellow for one of my felties. He's 9 inches long. His auction ends on Sunday at 6:45 PM PDT. I named him Java for his coffee and cream colored fur and because he reminds me of my Charlie who was a very mischievious Siamese. His favorite thing was to walk along the edge of the bath tub and splash water at you. However he wasn't the most graceful of cats and would sometimes fall in. He'd also get in one of those moods where he would race around the house knocking things over. And because he was so cross-eyed he'd end up running into walls. But that didn't seem to stop him. Charlie very often seemed like he had one too many cups of coffee. He was a great character and a part of my family.
20% from his sale will be donated to Old Dog Haven. They now have 190 senior pups in their care!
I hope you all have a very spendid Thanksgiving!
Posted by Robin Andreae at 10:17 AM 8 comments

An Arabian Mare and a Little Christmas Piggy 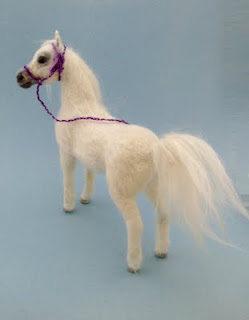 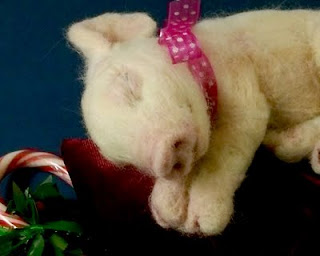 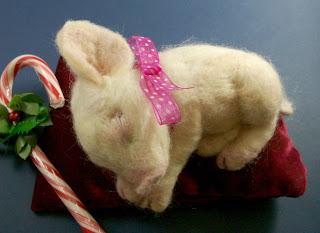 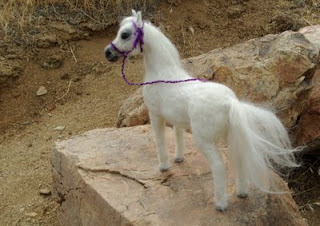 Here are my latest two, an Arabian mare and a little sleepy piglet. They're both on eBay now. I'm having one of those days that I don't have a lot to say. It's been a bit chilly here. But not as cold as elsewhere in the U.S. I got out for a hike a couple of days ago and was surprised to see that the Mojave green rattlesnakes are still out and about even in this cold. I finally got to watch the movie, "There will be Blood"'. It reminded me of what this area must have been like back in its hay day. We have a bit of local drama going on concerning something very similar to the movie. A new mining firm bought out the area and it looks as if half of Red Mountain will have to move. Red Mountain is a neighboring community of about 100 people. Silver was mined there predominately. I'm not too sure what they are after now as the mine has been played out. One thing about buying property in this area is that you may own the land but not the mineral rights or you may own your home but not the land. The folks in Red Mountain fall in the latter category.
Posted by Robin Andreae at 9:23 AM 7 comments 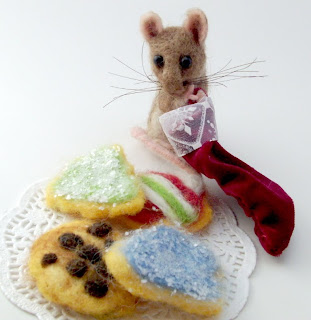 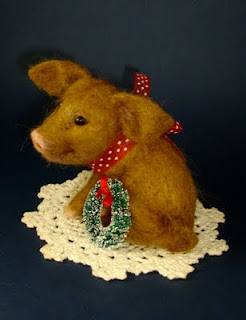 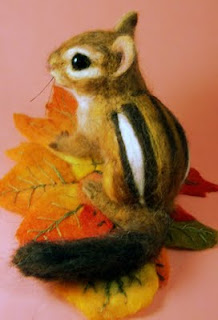 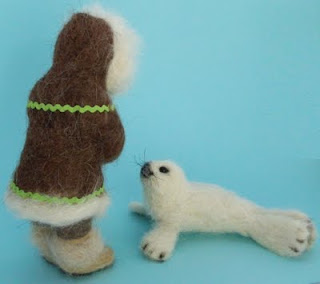 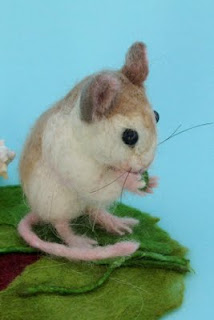 Sorry I haven't posted in a while. I can't believe how this year has flown by! We've already had a couple of pretty good freezes. And both my husband and I came down with the flu! So while I was resting between sneezes and coughs, I tried to catch up on some reading. When I opened up my last month's Utne reader, I saw the cutest thing I think I've ever seen. It was a photo of a little St. Andrew Beach Mouse by Joel Sartore. It brought to mind warm days, white sand beaches and the gentle waves of the Florida coast. And when I finally finished little Periwinkle and listed her, she sold right away.
My second piece was of an Inuit man and a baby harp seal. I continued my sale and it didn't go as well as I had expected. One of my regular buyers got a real bargain. They sold for under $30.00! I think that's the lowest any of my work has ever sold for. I was happy it was to one of my good customers. I guess people aren't ready for snow and cold, warm sunny beaches did much better.
I have three pieces on now, a little chipmunk named Hazel, a piglet by the name of Gingersnap and a little mouse named Kringle. They all end Sunday at 6:45 PM PDT.
Click here to view their auctions.

My flu is still lingering on a bit. Living in such a small town you get see how these things progress through the community. It seems the whole town has had this one. It's just the regular old seasonal flu. But we've had a couple of cases of swine flu already. One of them is a pregnant woman who contracted it by going to her prenatal checkups at the Ridgecrest hospital. She is recovering nicely. But it was a bit of a scare. The town children (all nine or ten) get innoculated for swine flu soon. I hope you all stay well!
Posted by Robin Andreae at 9:40 AM 5 comments

Bullet is a very special fellow with some very critical veterinary needs. His first exams were a whopping $539.35 and that's just the beginning to his long road to recovery from a serious skin infection and allergies. Without the help of Bull Terrier Rescue, Inc. and his foster home this sweet bully boy may have been put to sleep. Any amount will go a long way to help Bullet and others like him. Please donate to Bull Terrier Rescue, INC. 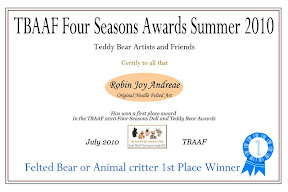